Personally monitored by the external affairs minister, coordinated through a ‘situation room’, using transport on air and on land, India is leaving no stones unturned to help evacuate thousands of its citizens caught in the crossfire of the Ukraine-Russia war.

Spearheaded by the Ministry of External Affairs and joined by embassies across the region, the government is continuously updating citizens with travel advisories over social media and has begun airlifting the expatriates.

Over the years, India’s civilian leadership, military and the aviation sector have worked hand in hand to evacuate thousands of Indians stranded in conflict areas. That template has come in handy in Ukraine too, where the attack by Russia entered the third day on Saturday.

MEA has opened a control room, and is overseeing the evacuation process along with its embassy in Kyiv, and camp offices in Ukrainian cities of Luiv and Chernivsti. Joining the efforts are its teams in Poland: in the Shehyni-Medyca and Krakowiec border crossings. Similar teams are working round the clock in border crossings of Hungary, Romania and Slovak Republic. Indians can contact helplines in all these offices.

External affairs minister S Jaishankar tweeted: “Regarding evacuation of Indian nationals from Ukraine, we are making progress. Our teams are working on the ground round the clock. I am personally monitoring. The first flight to Mumbai with 219 Indian nationals has taken off from Romania.”

Regarding evacuation of Indian nationals from Ukraine, we are making progress.

Our teams are working on the ground round the clock. I am personally monitoring.

The first flight to Mumbai with 219 Indian nationals has taken off from Romania. pic.twitter.com/8BSwefW0Q1

Earlier on Saturday, several of them boarded a government-hired Air India flight from Romania to Mumbai. Another flight will take passengers to Delhi. 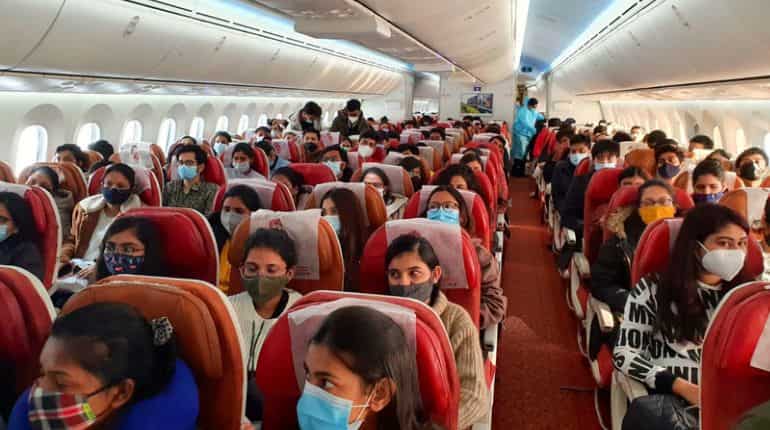 Indian citizens sitting in aircraft to fly back to India. (Image Courtesy: Govt. of India)

Air India had said earlier in a release that it will be operating flights on B787 aircraft from Delhi and Mumbai to Bucharest in Romania and Budapest in Hungary on Saturday, 26 February as special government charter flights to fly back stranded Indian citizens.

Earlier, the government had said it would bear the cost of evacuations.

In a travel advisory, the government said Indian nationals coming in from Ukraine who are not vaccinated and neither processing Covid-19 negative RT PCR report will be exempted from uploading documents on Air Suvidha portal before departure. The decision was taken on humanitarian grounds, it said, adding that such passengers can enter the airport.

All Indian Citizens in Ukraine are advised to not move to any of the border posts without prior coordination with Government of India officials at the border posts (helpline numbers established) and the Emergency numbers of Embassy of India, Kyiv. https://t.co/FVYjFUxh91