Grammy-winning superstar, Ayodeji Ibrahim Balogun, popularly known as Wizkid, has taken to social media to share a private message he received from veteran singer 2face Idibia, over his newly released album, Made In Lagos.

In the DM sent by legendary singer, praised and poured encomium on Wizkid for finding his distinctive voice, revealing it is a beautiful thing.

He wrote; ”One of the greatest things to happen to any musician is to find their distinct sound. Listening to your SFTOS and MIK albums, I see you have found yours. It’s a beautiful thing, young don. It was all a dream.”

Reacting to the message, Wizkid shared the DM on his instastories, captioning it; . ”Wow! It Means a lot coming from a legend i grew up admiring. Thank you! @official 2baba This made my day” 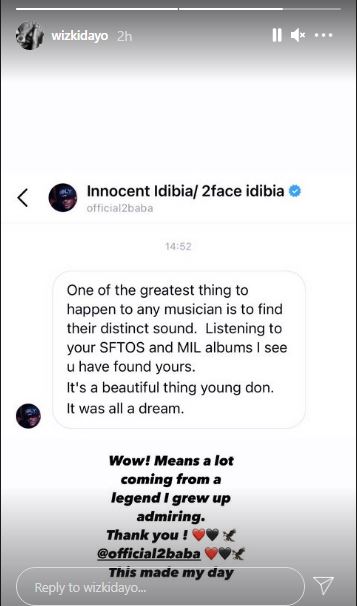 Meanwhile, Nigerian music stars, Wizkid and Burna Boy have been nominated in the ‘Best International Act’ category of the 2021 edition of the BET Awards. The duo will compete with Aya Nakamura, D Platnumz, Emicida, Headie One, Young T & Bugsey, and Youssoupha for the prestigious award.

The nominees for the 2021 BET awards were announced on Thursday while the winners will be announced during the award ceremony on June 27, Naija News reports.